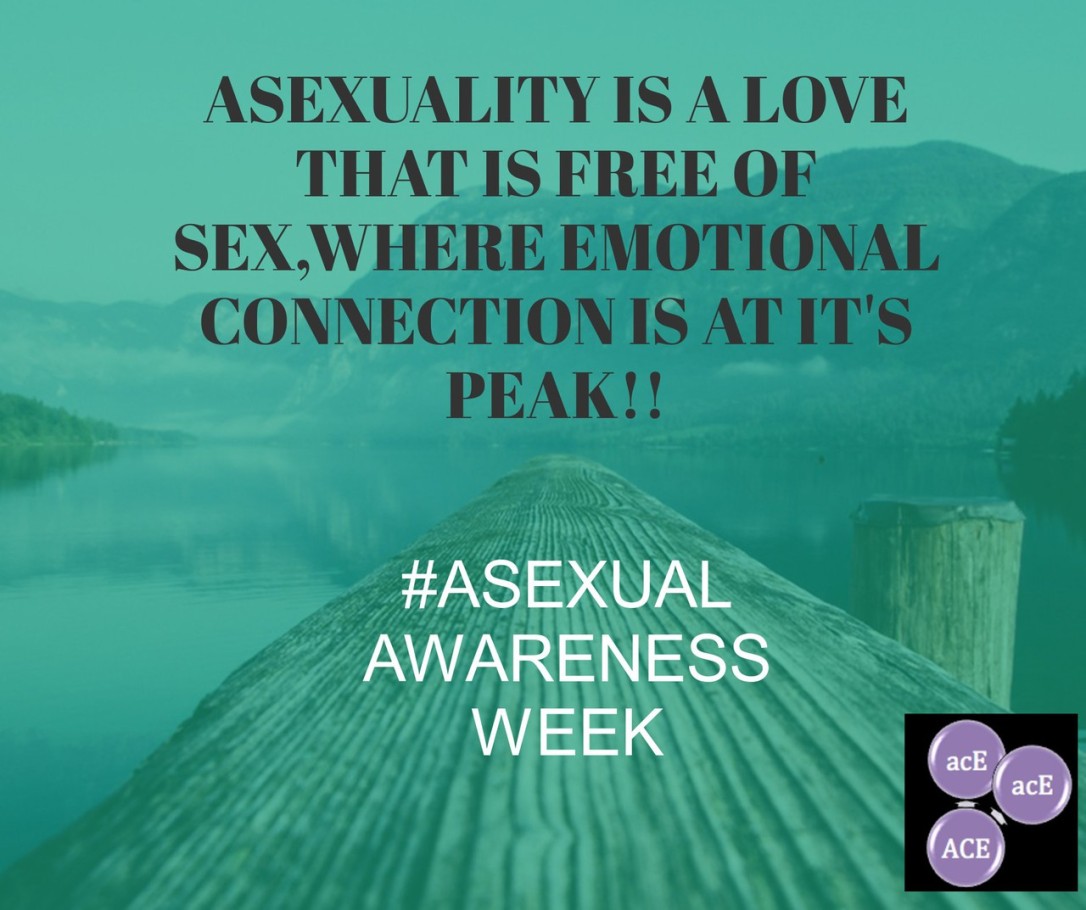 So from time-to-time, and this is one of those times, I like to replicate an interesting post from my writing and quirky blog www.quirkybooks.wordpress.com

Today marks the beginning of Asexual Awareness Week! Asexuality is a sexual orientation that is the lack of sexual attraction and makes up a recorded 1% of the population. This means we don’t get the need, urge, or want, for sexual intercourse! And when I say we, it’s because I am asexual, but more about that later!

Have you ever asked yourself, “Could I be asexual?”, “How do I know if I am asexual?”, And “What is Asexuality?”

Have you ever thought to yourself; I am not that bothered about sex; I don’t want sex; I don’t need sex; I don’t love in that way; I am not that type of person; but you are scared of saying that out aloud because society usually validates relationships with how good your sex life is? And society keeps shoving sex down your throat – Buy this to get more sex! Have to this get more sex! You need sex to be happy! You need sex to love! You need sex to live! I am here to tell you, this simply is not true for everyone. And if this sounds like you, there is nothing wrong with you, you are likely to be asexual and that is a great thing, because it means you have the capacity to love and be loved, in a relationship, without sex.

Asexuality is a sexual orientation that is barely unheard of and deeply misunderstood. Many asexuals are asexual from birth, but do not realise it until much later in life. In fact, it was a fellow blogger who used to write about sex in an educative way, not a lustful way, that first suggested I was asexual. But back then I hated the fact the word had the word sexual in it, it sounded alien to me, and I quickly retorted back in a message that I just don’t associate sex with love, but I like kissing, and that was the end of that. I am not sure how many years that was prior to my discovery, but in 2014, I went to see a counsellor, because I could no longer go on dating heterosexuals as it used to make me almost wet myself at the thought of the expectation they would want it to lead to sex. When I told the counsellor I was worried that I would like a relationship, but that I may not be able to be in one again, because I don’t like sex, she said that I would need to have sex in order to keep a good guy!! I thought this can’t be right, surely there must be others like me, and why should I have to do something I don’t want to do, just to have a good relationship? So I went home and Googled ‘I love kissing but not sex’, and it came up with asexuality and www.asexuality.org which is the biggest online community for asexuals. I read some of their forums threads, before registering at a later date, and I really related to what they were saying and I thought, ‘Finally, there are people like me in the world, who can love and have relationships without sex, and who want relationships without sex, and I am not alone, and I never have to have sex again in my life’, it was such a relief!! I now have an asexual boyfriend, I couldn’t be happier!

The full definition of asexuality is: Asexuality is the lack of sexual attraction, and/or little to no interest in sexual activities. Notice the OR. So although most asexuals are born asexual and do not realise it, there are a smaller number of people who identify as asexual later in life, because things have changed for them and they are permanently no longer interested in sexual activities, even if previously they lead a very heterosexual life. I was born asexual but did not realise it, and I was in heterosexual relationships for years, but I did not experience sexual attraction as I had no urge, need, or want to have sex, even with someone I loved. Although I have had sex in the past and my last long-term ex was good at it, I always preferred his kiss and finger to his penis, and had sex because I felt I had to!

Within the Asexuality sexual orientation, there are subcategories on something called the Asexual Spectrum. If you think of the A in Asexual to mean ‘absence’ of sexual attraction, you can’t go far wrong. So if you think of it as starting off as aromantic asexuals – those who are absent of romantic attraction and absent of sexual attraction, then the greyromantics, those that experience a little romance in certain circumstances but not sexual attraction, and the demi-romantics, those who can only experience romantic attraction, once a strong emotional bond has been formed, but not sexual attraction. Then there are the romantics. Within the romantics; those who experience romantic attraction, there are heteroromantics (attracted to the opposite sex or gender romantically but not sexually), which is what I am. I am only romantically attracted to guys. I want to kiss, hold hands and cuddle, but not have sex with them and I am never attracted to women. There are the homoromantics, (attracted to the same sex or gender romantically but not sexually), biromantics, (those attracted to both male and female romantically but not sexually), and panromantics, (those attracted to any gender romantically but not sexually, when I say any gender, this could include attraction towards those who are agenda and gender fluid). This list is not exhaustive, this is just the main ones. Then there are those asexuals on the more sexual end of the asexual spectrum, known as the grey asexuals and demi-sexuals. The grey asexuals, who are often also known as Grey A, or sometimes greysexuals, are those who experience sexual attraction but only under limited, or rare, or specific circumstances, or who experience sexual attraction but not enough to want to act on it. Grey asexual, also used to be a catch all term for those who are somewhere between asexual and sexual, but don’t quite fit into an asexual box. However, this definition is no longer on Aven Wiki. Which is a resource about asexuality from www.asexuality.org. In my Asexual Perspectives 47 Asexual Stories, Love, Life and Sex, ACElebration of Asexual Diversity book, I redefine Grey A to mean asexual with Grey Areas, such as sexual behaviours. So my Grey Area for example is I love passionate kissing and I experience high levels of arousal, but I never experience sexual attraction. This means that I can exhibit some sexual behaviour, even though I never have a need, urge, or want for sex. But I don’t feel comfortable just saying I am a straightforward heteroromantic, because many heteroromantics don’t like kissing as much as I do, or how passionately as I do, so I don’t fit the Grey A box as it is described, but I have Grey Areas, which is why I think Grey A, should be a separate definition to grey asexual and greysexual. And finally we have the demisexuals, those who usually experience romantic attraction, but can only experience sexual attraction once a strong emotional bond is formed and this could take up to 2 years or more, for example. And this if you like, is where asexuality ends and the sexual spectrum starts. Although there are other asexual categories and subcategories, even within the categories I already mentioned, but I don’t want to confuse you as it’s a lot to get your head around. Subscribe to my channel if you want to know more about asexuality www.youtube.com/c/asexualisemyasexuallife

I wrote a book about asexuality, you can shop for it here by clicking on this link: Asexual Perspectives 47 Asexual Stories, Love, Life and Sex, ACElebration of Asexual Diversity.

If someone is asexual, they are often referred to as ace, and I usually always end my asexual blog posts with always stay ace!

As this is my redundancy and inspiration blog, I will say, always stay positive, not matter what! Sandra xx

I write Quirky Books that change lives from pain to gain, specialising in Asexuality. And I teach people how to make money online, publishing books on Amazon KDP, and selling stuff through Facebook Marketplace, eBay and Vinted. Quirky Books is my own publishing imprint and I specialise in non-fiction books for specific niches. Asexuality is one of those niches. Written in my own 'quirky' unique style, Quirky Books specialises in books which have out of the box thinking and often with a quirky twist, and are first for crossing some genres. Writing is my hughest life passion, followed closely by asexuality. As well as an Author, I am best known for being the Presenter/Chat Show Host at Asexualise My Asexual Life, Asexuality chat show on YouTube, specialising in dating, relationships, self-love and self-growth, which has had over 388,000 views. I was a speaker at the UK Asexuality Conference in London, in July 2018, and yes, I really am ACE Fibro Girl! View all posts by Quirky Books

This site uses Akismet to reduce spam. Learn how your comment data is processed. 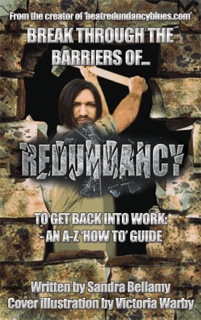 How To Make Money As A Healer And Artist, By Healing And Loving Yourself First.

Have you ever wanted to make money doing what you love? Ever wanted to be a best selling author? Do you love art? Is painting your passion? Do you feel a deep spiritual calling to help others? If so, this post is for you. On my Make Money Make Cash channel, I teach people how […]

Have you ever struggled to turn your passion into a profession? Do you stress and worry over money? Are you an aspiring author or business owner, but you don’t know where to start, what to do, or how to scale? Or are you an established “business owner” but it feels like you’re chasing your tail […]

How To Create Soulgasmic Impact And Moneygasms, And Be Boldly Unapologetically You!

Rosalyn Fung Coaching: Bold Sexy Warrior was an amazing illuminating soul and a transformational speaker on Corey Poirier’s Speaker/Writer/Podcaster Bootcamp, which was the third and final day today. At this Bootcamp, Rosalyn Fung (Shooting Star Woman) enlightened us, as to how we can speak for impact and income, but on a soul level. And how […]

Attention! Authors, Entrepreneurs, Speakers, Podcasters, Creatives! Want to Win VIP Ticket to Corey Poirier Speaker/Author/Podcaster Bootcamp (Worth $145.00)? Less Than 33 Hours To Go – Don’t miss this FREE to enter competition. I’m attending this event myself, and the last one was amazing and I got podcast interviews from it. So this isn’t any old […]

Does This Sound Familiar? You’re new to self-publishing on Amazon and you don’t know where to start. You’ve searched the internet but it’s so full of ideas you just don’t know what to do or who to believe. The information is so scattered, your head gets filled with so many ideas and voices that drown […]